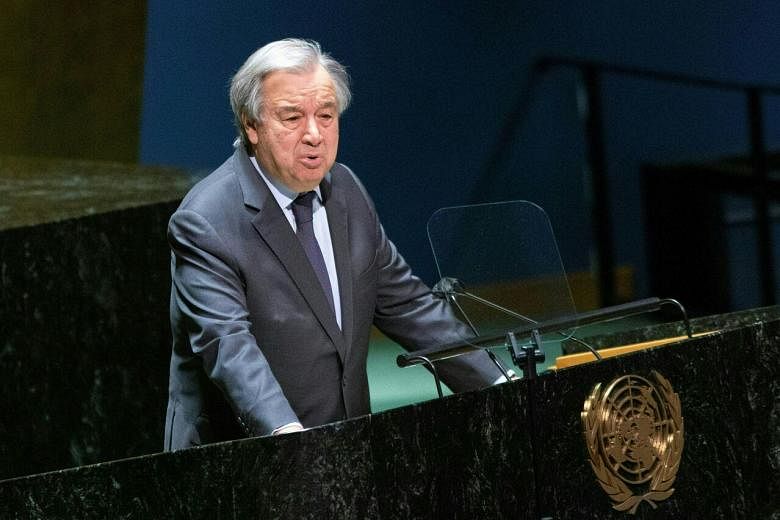 UNITED NATIONS (REUTERS) – UN Secretary-General Antonio Guterres on Tuesday (March 22) urged an end to the “absurd war” began by Russia’s invasion of Ukraine one month in the past, warning that the battle is “going nowhere, fast” and that the Ukrainian individuals are “enduring a living hell”.

Russia is pounding the besieged Ukrainian port of Mariupol into the “ashes of a dead land”, its native council mentioned on Tuesday, describing two extra large bombs that fell on the town that has been sealed off for weeks.

“Even if Mariupol falls, Ukraine cannot be conquered city by city, street by street, house by house,” mentioned Mr Guterres.

“This war is unwinnable. Sooner or later, it will have to move from the battlefield to the peace table.”

He added: “It is time to end this absurd war.”

Russia launched what it calls a “special military operation” on Feb 24 to destroy Ukraine’s navy infrastructure.

Ukraine and its Western allies have accused Moscow of attacking civilians indiscriminately.

Mr Guterres mentioned about 10 million Ukranians have fled from their houses and warned the reverberations of battle had been being felt globally “with skyrocketing food, energy and fertiliser prices threatening to spiral into a global hunger crisis”.

“There is enough on the table to cease hostilities – now…  and seriously negotiate – now,” he mentioned.