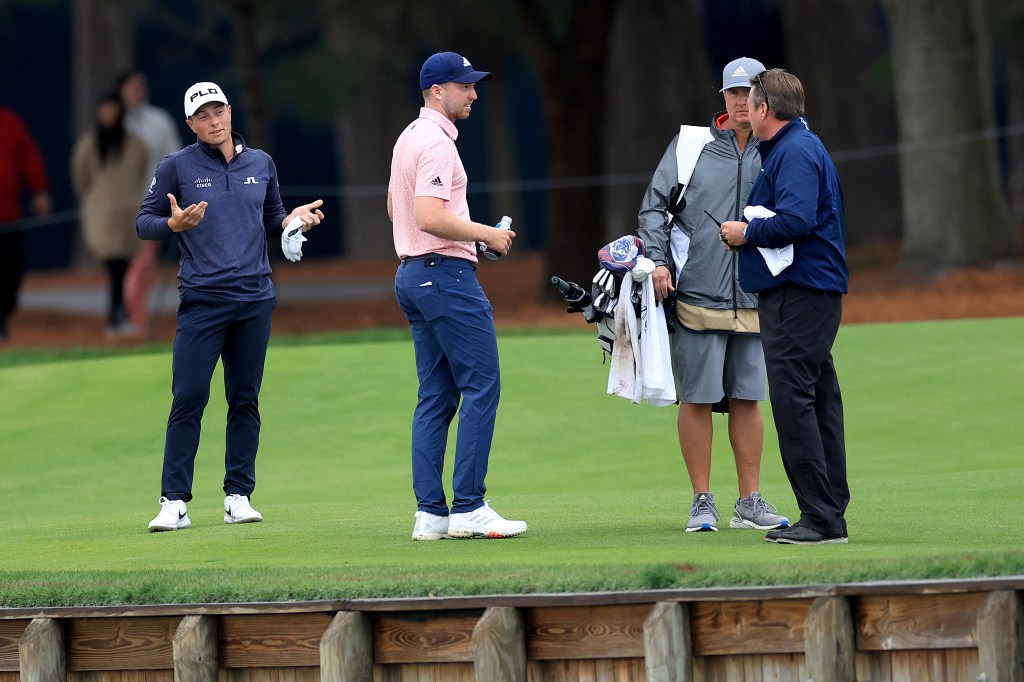 The drama at The Players Championship was not restricted to Cam Smith’s adventurous 72nd gap.

Berger claimed that his second shot crossed over the water close to the inexperienced, whereas a “skeptical” Hovland insisted the drop needs to be additional again and Dahmen agreed.

“We thought it was pretty much at the pin and you were hitting from the right side of the fairway,” Hovland stated.

Then Dahmen added, “I don’t think it crossed up here.”

With every shot of the event being recorded, each side had been calling for a replay as Berger grew extra agitated.

“I’m not going to take a drop that I don’t feel 100-percent correct about,” Berger, who was 7-under and 4 photographs again coming into the opening, stated to Dahmen. “I’m not saying it’s all the way up (by the green), but it’s not back there.”

The argument dragged on for a number of minutes.

“I don’t have it here, it’s not even a question to me… Zero-percent chance,” Berger stated.

“I am really not OK with it being up there,” Hovland stated.

Berger ultimately relented after guidelines official Gary Young stated the group “would have to decide amongst themselves.”

“You know what,” Berger stated, “I’m going to drop here for the sake of you guys, but you guys are wrong. … It’s a wrong drop.”

Berger hit his fourth shot onto the inexperienced after which two-putted for a bogey. He completed the event at 6-under.

“We try to keep it professional. It’s not like we’re trying to dog on Daniel and trying to screw him over. It’s just, that’s what we believe, and he obviously felt strongly the other way,” Hovland stated after the spherical, according to Golf Channel. “I’m not accusing him of anything. The golf ball is in the air for a couple seconds, so it’s tough to exactly pinpoint where it crossed.”

Smith gained the occasion by one stroke, regardless of going into the water on 18 and having to get well for a bogey.